It is astounding what we have accomplished together.

January 2020 will mark my 18th year at Historic Columbia. Looking back at the changes that have taken place I note the physical and interpretive shifts to the buildings and grounds, a growing footprint in the community far beyond the Robert Mills Historic District, and an increase in organizational support across all sectors. It is astounding what we have accomplished together.

2019 has been an exciting and dynamic year for our public programs. As we continue to grow and improve annual programs such as Preservation Awards, Jubilee and Candlelight Tours, we also have engaged in new and dynamic partnerships that open doors to cutting edge interpretation and new audience engagement.

After fielding an inquiry from the Smithsonian Channel in August 2018, HC staff welcomed a film team working on a documentary about the Green Book – a guidebook for black travelers during the Jim Crow era. HC helped ground the SC story that was highlighted in The Green Book: A Guide to Freedom by providing the filmmaker tours of extant buildings that housed tourist homes, hotels, restaurants, and other businesses and facilitating an interview with Dr. Henrie Monteith Treadwell, whose aunt Modjeska Monteith Simkins ran Motel Simbeth. The film’s world premiere played to a full house at the SC State Museum in January 2019. 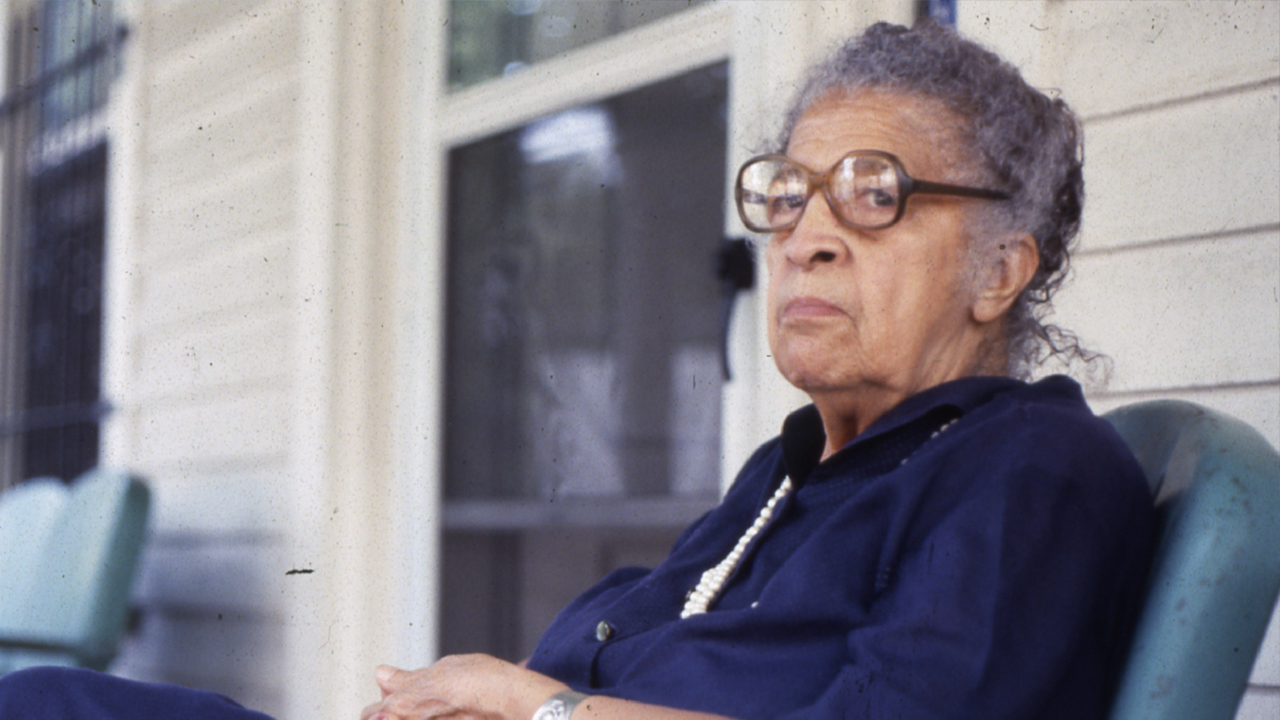 Modjeska Monteith Simkins, on the porch of her home at 2025 Marion Street.

Just two months later, in March 2019, the Women’s Rights and Empowerment Network (WREN) and HC launched the Columbia City of Women Initiative at an event announcing 12 inaugural honorees. Inspired by an idea hatched by SC’s former first lady Rachel Hodges and her son Luke, Columbia City of Women was designed to raise awareness of the disparity in the representation of women in public spaces and to develop tools to close that gap. By identifying places where women have blazed extraordinary trails, this initiative literally and figuratively places them on the map of Columbia where they belong. Working with a steering committee with representation from the City of Columbia, Richland School District One, and the University of South Carolina, and funded by the City as well as the Knight Foundation and Central Carolina Community Foundation, WREN and HC will continue to build awareness through community engagement projects, public programs and the installation of a new monument to women in Columbia. 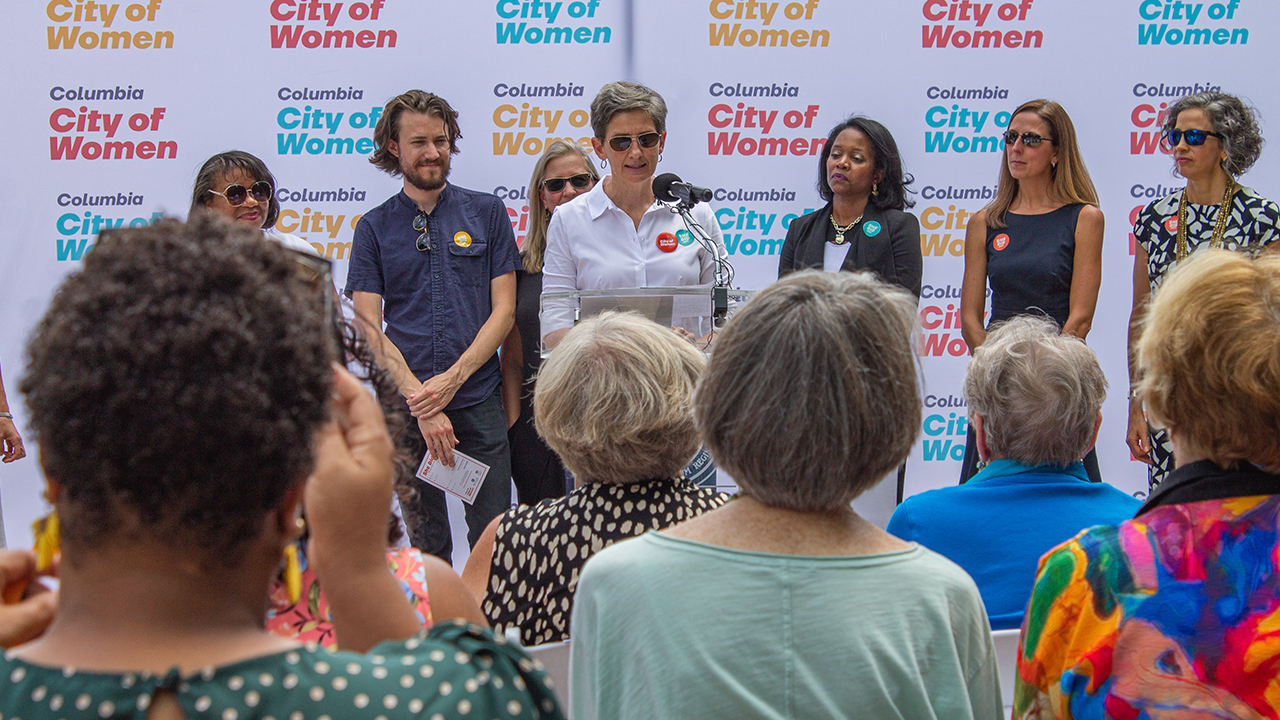 Historic Columbia Executive Director Robin Waites speaks at SHE DID Day, on August 26, 2019.

In the spring of 2018, Tanya Wideman Davis and Thaddeus Davis of Wideman-Davis Dance approached HC about hosting a technical residency at the Hampton-Preston Mansion and Grounds. In preparation for the residency, staff deconstructed all period room settings, providing complete access for the work to be created and viewed. The performance, Migratuse Ataraxia – an exploration of the experience of black bodies moving in an antebellum structure, proved transformational for the 75 people who attended over 3 days in April 2019. For HC, the partnership inspired a reconsideration of how historic spaces are used, who has access, and what steps we need to take to ensure that a more diverse collection of voices is heard across all sites. 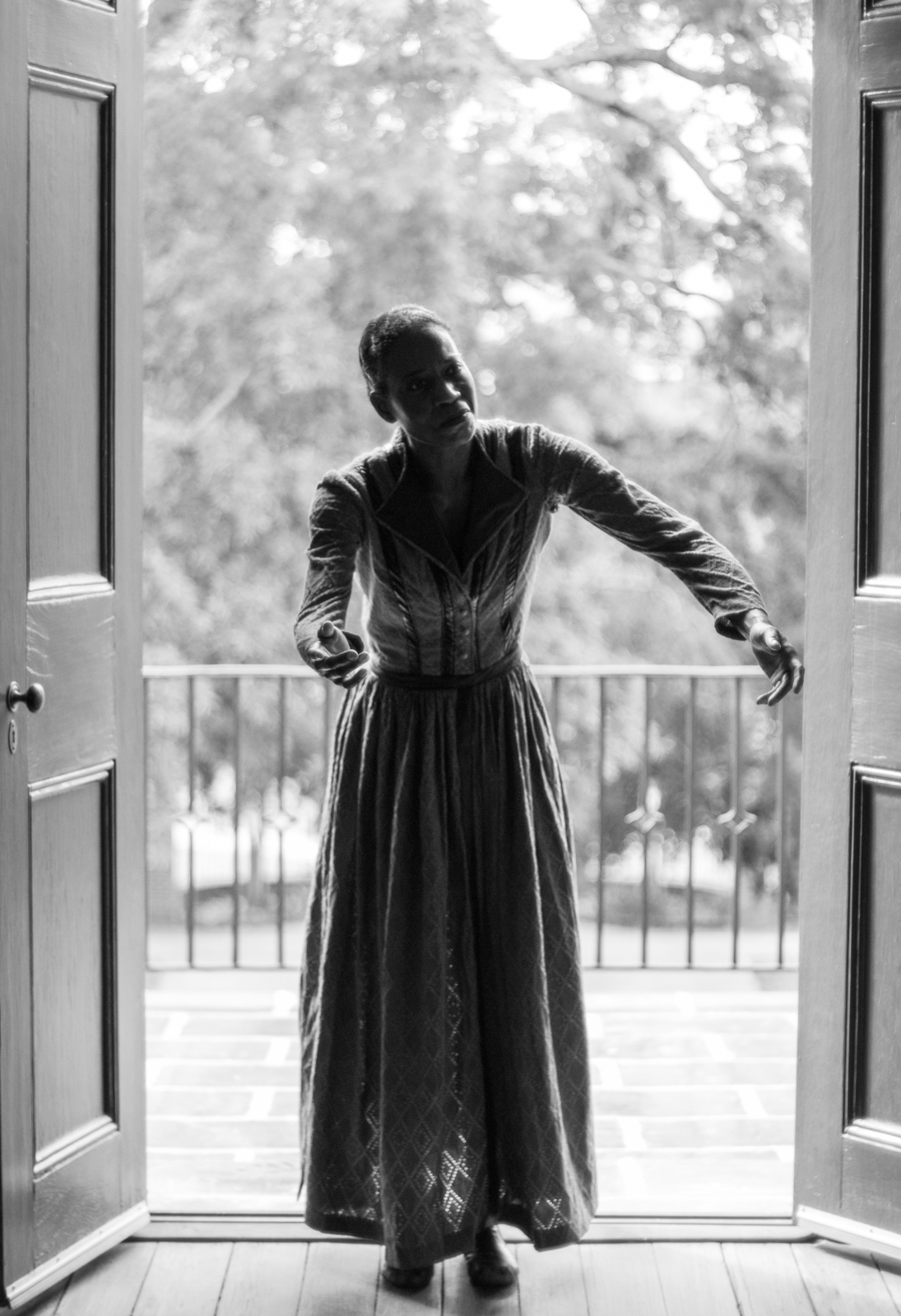 At the Annual Preservation Awards program in May, HC recognized the Ward One community with the 2019 Preservation Leadership Award. As a bookend to this recognition, working with the Ward One Organization and Columbia SC 63, we cut the ribbon on a permanent panel exhibit at the Palmetto Compress Warehouse, which tells the story of the neighborhood. A community whose physical evidence was largely erased by urban renewal in the 1950s, 60s and 70s, the Ward One Organization maintains an extraordinary and inspiring commitment to the preservation of their neighborhood in ways that serve as a model for others. 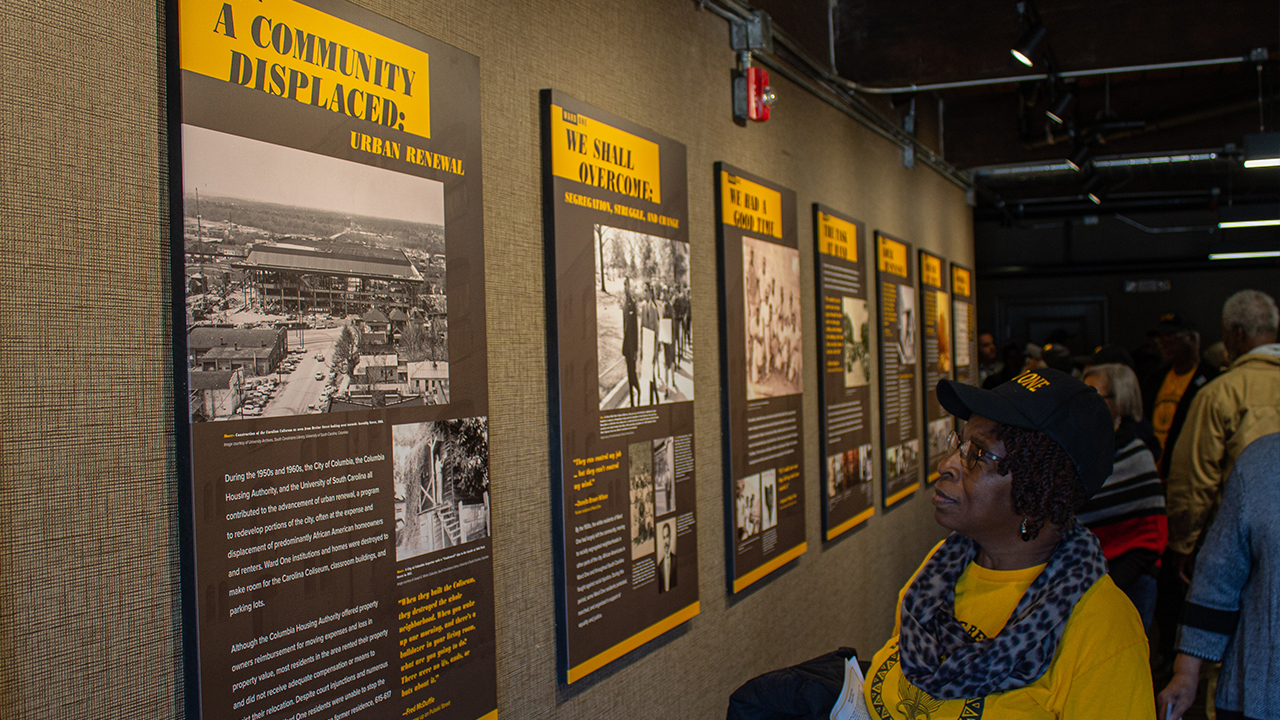 "Remembering Ward One" is now on display at the Palmetto Compress Warehouse.

In additional to finding new programmatic access points to local history, in 2019 we continued to improve the historic sites that we manage.

Thanks to a million-dollar gift from the Susan and Darnall Boyd Foundation, work at the Hampton-Preston Site continued to evolve with the renovation of the basement to include restrooms, a bridal suite and classrooms (furniture for which was funded by the Graham Family Foundation). In addition, at the rear of the site, where an 1840s addition once stood, we now have a sunken patio feature that serves both interpretive and functional purposes. Visitors can get a better sense of the full scale of the historic home and utilize the space for programs and events. 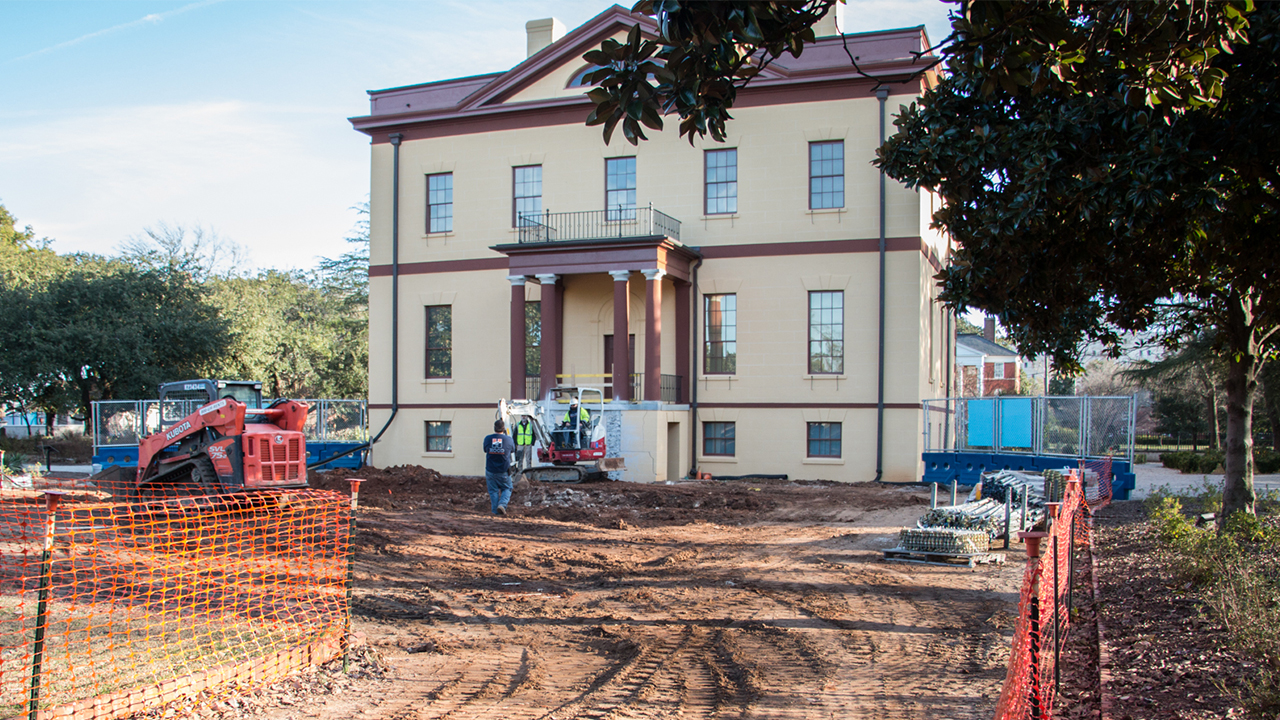 Working on the back lawn at the Hampton-Preston Mansion.

We also worked with Esther Maldonado at Pond Architecture, who provided pro-bono services for a renovation of the Gift Shop at Robert Mills. Stocked with a variety of books, jewelry and HC-related merchandise, we are ready for your business! 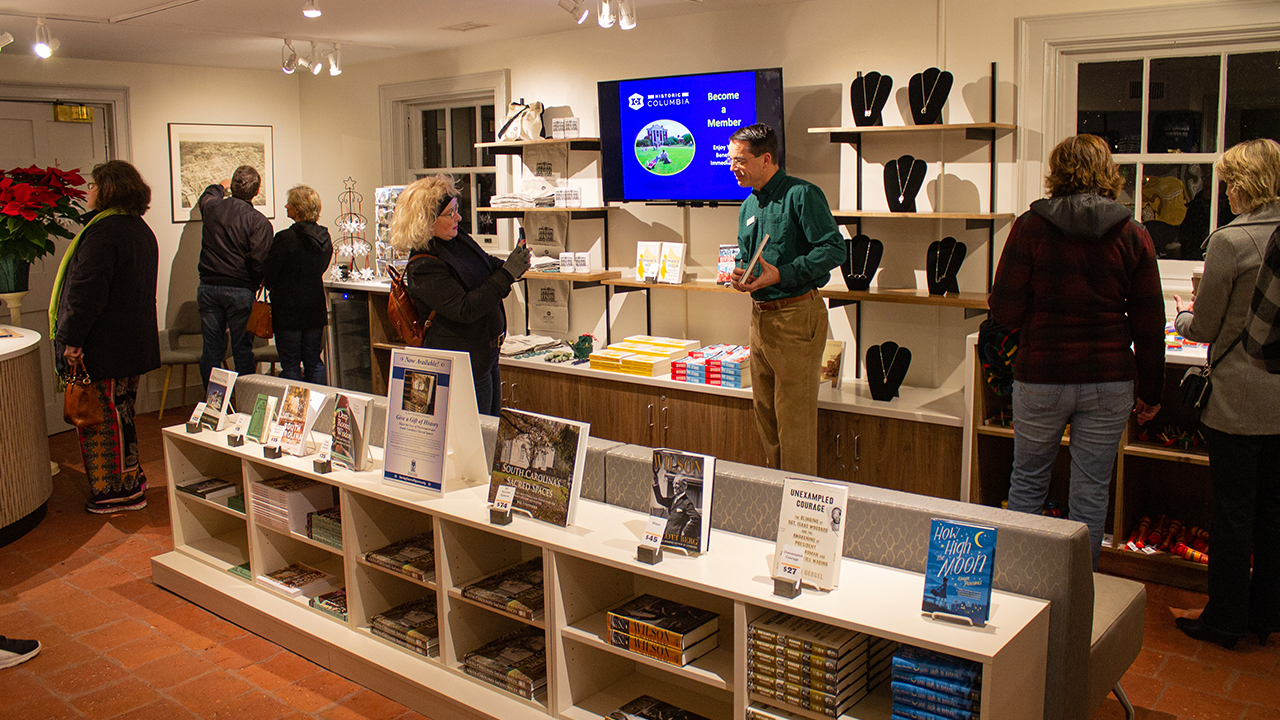 The newly-renovated Gift Shop at Robert Mills reopened in October 2019.

As we continue to expand our offerings and footprint, we need your ongoing support! Consider the many ways to make an end-of-year contribution to HC to ensure that 2020 is our best year yet.

Give to Historic Columbia.