Much-anticipated capital improvements to the Hampton-Preston site during work this winter and spring have yielded exciting finds—both inside and outside the building. In December, paint analyst Betty Prime with Meadors Construction of Charleston, spent two days pulling samples to determine how occupants changed the house over time to better suit their aesthetic interests. Prime’s attention largely focused on Interior paint, analysis of which was underwritten by a 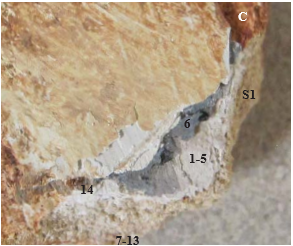 With scalpel in hand, she meticulously harvested samples in nooks and crannies that even the most detail-oriented workers during the 1969-1970 rehabilitation had not chemically stripped to bare wood) for the application of new paint (not an approach that preservationists would take today. Prime’s best samples came from deep within the volute of the first-story staircase. Further work she performed, albeit outside, as something beyond the scope of the NTHP grant-related investigation, involved stucco samples she pulled from original sections of the estate wall that were known to feature the earliest remaining finishes and not sections affected by rehabilitation work. Combined, these analyses will help guide decisions on interior and exterior finishes moving forward at the site.

To combat moisture-related damage to the building, workers are performing waterproofing measures involving the removal of a failed system and the excavation of many cubic yards of soil around the foundation of the mansion. Work proceeded without interruption until the discovery of a fascinating remnant of flooring located in the northeast corner of the building underneath a ramp installed around 1979. At first glance, the flooring appeared to be concrete and was surmised to be left over from 20th-century improvements made to a ca.-1850 addition that extended off the ca.-1818 mansion to the north. However, closer inspection revealed two distinct layers of a very smooth surface applied to a lens of large bricks laid in a somewhat haphazard fashion, as if they had served as an exterior walkway or perhaps if they shifted over time. Consultation with Kirk Dillion, whose firm, Dillion Construction, is performing stucco repair, confirmed the composition of the layers was lime-based.

This realization pointed to the layers predating initial estimates and therefore suggested that the remnant could represent upward of three “building episodes”: a brick exterior pathway, original to the 1818 building footprint, improved two times after the pathway was subsumed during the construction of the 1850 addition or a mid-19th-century brick basement floor, potentially improved two times through the addition of a smooth application of a lime-based plaster treatment. While no final supposition has been made, this unique feature has been measured, photographed and preserved for future researchers to learn more about the site’s evolution.

These discoveries prove that even after generations of research, old buildings can still offer up new information, sometimes through intentional investigation and sometimes simply by luck!

Learn more about the 200th anniversary of the Hampton-Preston Mansion.