On Thursday, April 5, 2012, Joseph McGill, a field officer with the National Trust for Historic Preservation and a Civil War 54th Regiment re-enactor, offered an unprecedented program for Historic Columbia Foundation. In an effort to heighten awareness in and support of preserving sites associated with slavery McGill spent the night in the circa-1830 kitchen dependency at the Seibels House as part of his Slave Dwelling Project. In McGill’s line of work historic preservation is applied to far more than architectural jewels or sites associated with prominent people. Historic preservation is the mechanism by which we prevent cultural amnesia and avoid losing aspects of our past that inform not only us today but generations of future citizens. McGill’s visit serves as a springboard into perhaps a broader appreciation for historically important sites whose full background specifically that involving the work of enslaved persons, often has gone un- or under appreciated. 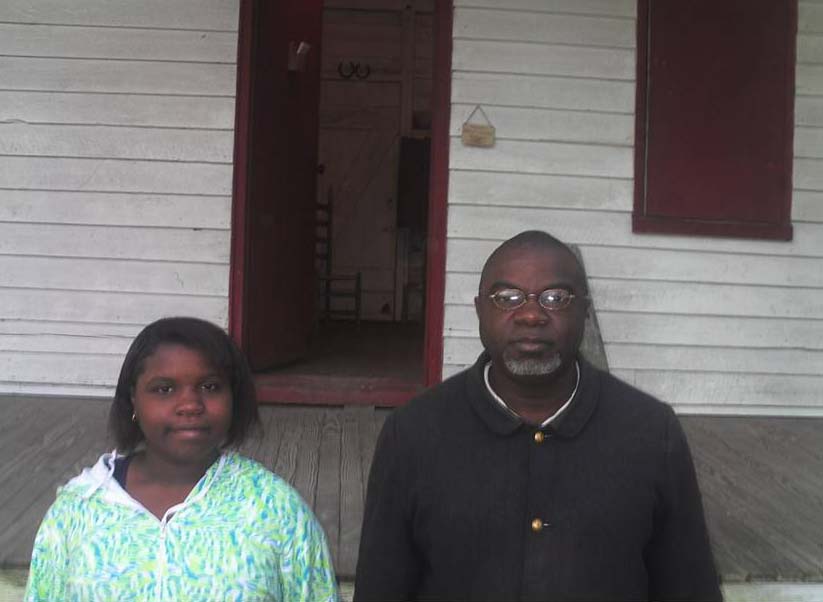 Joseph McGill, pictured here with daughter Jocelyn, established a unique initiative to ensure that sites associated with slavery, particularly former homes of enslaved persons, are preserved so that the contributions of these bondsmen are not forgotten. Through his efforts future generations of citizens will benefit from this history contained within these irreplaceable cultural resources.

Bondage, servitude, subjugation, the Peculiar Institution – regardless of its name – the institution of slavery remains a fiercely painful and poignant chapter in our nation’s history and nowhere more so than in the South, where it defined economic, social and political relationships for generations. Its centrality to our shared culture remains today, in memory and in the buildings that dot our landscape. Columbia, South Carolina certainly is no exception, where the institution of slavery laid the foundation for state-owned, municipal and private structures erected prior to the February 1865.

As the birthplace of secession, Columbia served as a political and military objective during the final stages of the Civil War, as Union forces captured the state capital. The subsequent destruction, caused by a series of fires, whose kindling damaged or destroyed approximately 1/3 of the city, took with it many unique examples of antebellum buildings erected by enslaved and free, white and black, Columbians alike. Further loss of buildings occurred during the course of the next 100 years, as wear and tear resulted in deteriorated structures easily replaced by citizens interested in embracing more modern homes, businesses and public buildings.

Often, historically or architecturally significant buildings that were saved received a stay of execution by the grace of their aesthetic potential or because they were simply located in areas where the price was right for their purchase and rehabilitation. In some instances, buildings never experienced a decline in their use; rather, they were part of large institutions with relatively steady financial streams that ensured their continued use. Rarely considered was the idea of how any of these properties revealed the experiences of former enslaved workers. In fact, in instances in which buildings were so obviously representative of slavery’s dark chapter in our shared past, owners, developers, administrators and leaders embraced their modification or destruction.

Well into the 21st century, Columbians and visitors to the state capital come in contact with slavery-associated sites on a day-to-day basis. In some cases, they actually seek out these sites in order to better understand a past that still resonates with contemporary life and whose impact will remain to be felt in the unforeseen future. Nationally, historic preservation has matured since the summer of 1966, when federal legislation established the National Historic Preservation Act that helped ensure the future of properties throughout the country. This trend toward expanding our view as to what matters historically fortunately has enhanced our contemporary capacity to use built culture and landscapes in vital ways that do not erase the contributions and memories of our forebears and how their shared experiences influenced who we are today.