Today a modern, state-of-the-art science facility, 1112 Greene Street has a past rooted in the mid-1960s, a time in which the University of South Carolina dramatically grew during a construction boom that lasted into the 1970s. At the helm of this sea changed stood Harold W. Brunton, Jr., VP of Business Affairs at USC, who, in overseeing the institution’s strategic growth, created a master plan of development for the decade from 1970 to 1980. Prioritized, construction of a new law school as a replacement for the university’s earlier, obsolete facility assumed a three-phase approach, the collective of which swept houses and stores from the south half of the block.

Like much of the construction altering the state capital’s skyline at the time, the new USC Law Center that was built between 1971 and 1974 reflected contemporary interest in modern architecture. Columbia’s M.B. Kahn Construction Company erected what the Florence-based architectural firm of Gills and Wilkins, designed as an architecturally worthy neighbor to the new coliseum just west of Assembly Street. The gravity of the university’s accomplishment became apparent in May 1974, as Vice President Gerald Ford (who two months later would be inaugurated as POTUS following Nixon’s resignation), Senator Strom Thurmond, Governor C. West, and Chief Associate Justice of SCOTUS Lewis F. Powell, Jr. all attended the center’s debut. For the next generation, thousands of budding lawyers would spend countless hours at the sprawling facility that lay south of the state house. 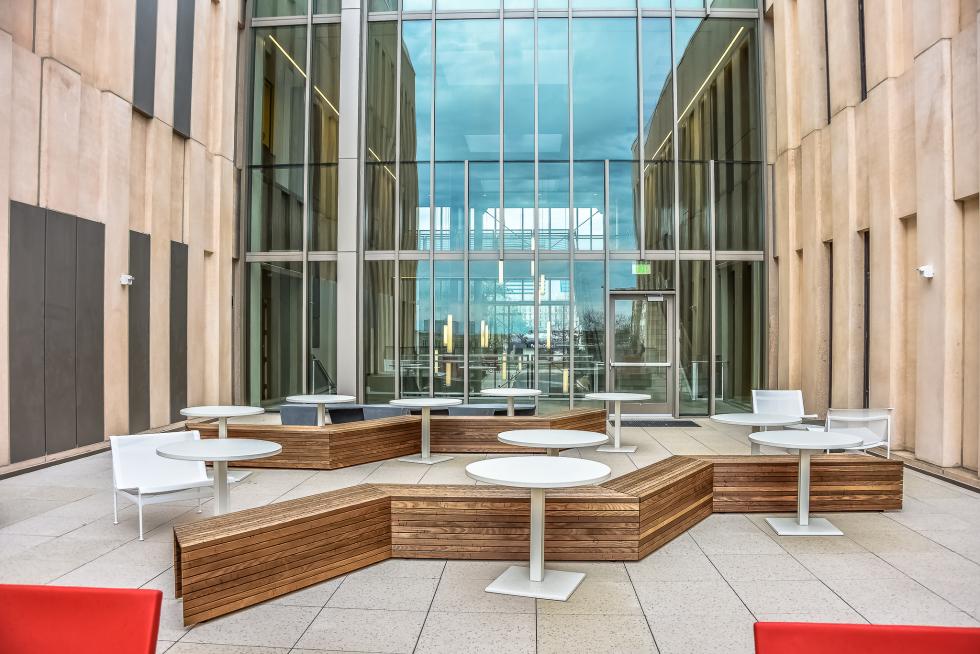 Completion of the current USC Law Center on Gervais Street in 2017 placed 1112 Greene Street, a then-aged building, on a course for new use. Appreciating the 194,000-square-foot, precast building’s potential, Watson Tate Savory Architects used the robust modernist structure as the shell for a dramatic redesign that resulted in extensive new construction in an historic context. Replacing the building’s original underwhelming north entrance, a dramatic three-story atrium incorporating former exterior walls today creates a welcoming communal gathering space. This feature, coupled with new glazed curtainwall systems installed on the north, south, and west elevations, transform the building into a well-illuminated facility reborn as the USC Chemistry Lab. Though Watson Tate Savory’s design savvy this formerly obsolete, mid-century academic building stands as testament to the creative reuse of an historic buildings that activates the Green Street-Assembly Street intersection.