On August 7, Historic Columbia will host the first Behind-the-Scenes Tour of 1649 Main Street—a place with a rich history known to most as Hennessy’s.

The first known visual record of the building is an 1872 illustration by C. Drie, drawn when Main Street was called Richardson Street. Drie depicts the building as the largest structure on the block, standing three stories tall with a flat roof and a large warehouse in the back, similar to other commercial spaces in that district at the time.

Originally home to a grocery, 1649 Main has gone through many changes in face and ownership since its original construction in the mid to late 19th century. The most complete description of its historic appearance is from a 1928 article in The State that announced the opening of Ruff Hardware Company. Significant renovation that year accommodated the shift from a grocery to a retail store – the 1928 renovation represented a $60,000 investment at the time, which would be nearly $900,000 in today's dollars. 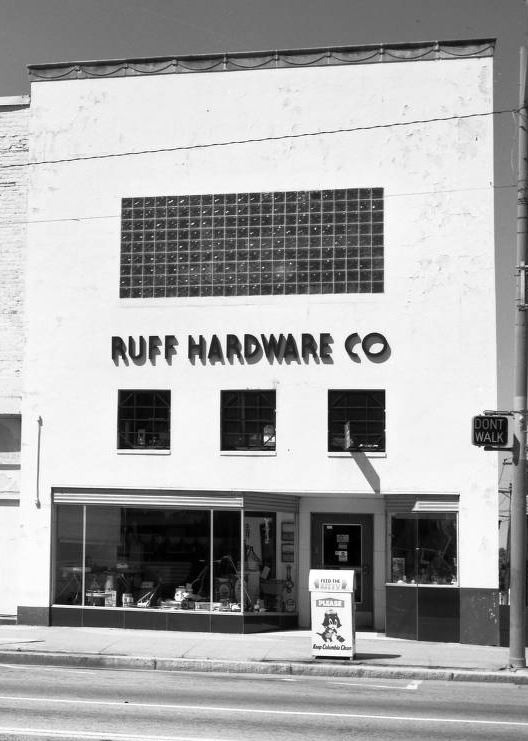 The 1928 newspaper article described it as a three-story building with 26 feet fronting on Main Street and 150 feet fronting on Blanding Street. It was 11,000 square feet total with fireproof construction throughout. The Main Street side included the building’s “most attractive” entrance with three “tastefully finished” display windows that allowed the abundant natural light the National Retail Hardware Association recommended for store interiors. Photographs in the article depict a tall rectangular tile entablature topped by a stepped cornice, resembling a mantle. The building’s interior included a large wooden staircase in the center, pressed tin ceiling tiles, and display shelves lining the long walls.

By 1941, Tapp’s Department store, across the street, had become an icon for the “‘new’ Columbia” in the 20th century; its modern design pressured other retailers to stay visually relevant. Another renovation of 1649 Main began in 1941, and the building began to more closely resemble what we see today. The Main Street façade was covered in plaster and the tall cornice and entablature were removed. Metal lettering spelled out “Ruff Hardware” just below a large square window in the third level.

Businesses began to move away from Main Street with the rise of suburban shopping malls and big box retail stores in the mid to late 20th century. In keeping with this trend, Ruff Hardware shuttered its shop at 1649 Main Street after 70 years in the building. The property gained fame in the 1990s and 2000s as Hennessy’s, a restaurant and lounge beloved by many Main Street patrons. Despite several significant renovations throughout the 20th century, 1649 Main Street retains the open floor plan, pressed tin ceiling tiles, and expansive basement designed for retail in the earliest eras of Columbia’s Main Street retail district.

After several years of vacancy, the historic property will get new life again as Hendrix restaurant. Its name references E.T. Hendrix, the building’s historic grocer who occupied the space from 1906 to 1926. Hendrix restaurant will offer chef-inspired dining in the building’s upper levels, including rooftop seating. It is set to open fall 2018. Two additional spaces are still available for rent - as retail or restaurant space - on the street and garden levels. For inquiries about existing shop space, contact Scottie Smith at (803) 401-4213 or scottie.smith@colliers.com.

The Behind-the-Scenes Tour of 1649 Main Street will be held on August 7 from 6 – 7:30 p.m. In addition to getting a sneak peek of the recently renovated space, guests will also be the first to try Hendrix fare. This event is now open to the public. A limited quantity of tickets are available and must be purchased online in advance of the tour. No walk-ups are allowed.

Join Historic Columbia and save on your Behind-the-Scenes tickets! Learn more