Introducing Historic Columbia's new book series focused on sharing what's in the Gift Shop at Robert Mills or what particular reads the HC staff find interesting lately! The Gift Shop at Robert Mills is open Thursday-Saturday 10am - 2pm and products are available online, as well. You'll also find local or online resources to access these publications in the links below.

The Woman’s Hour by Elaine Weiss 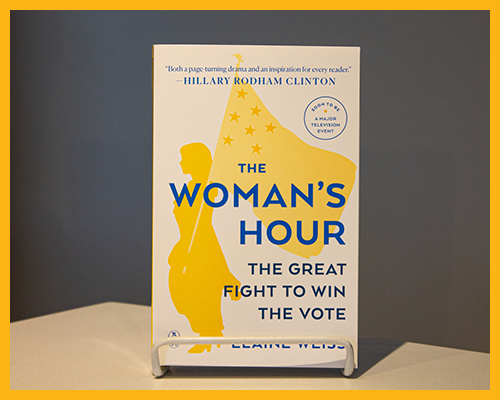 Elaine Weiss’s unforgettable book tells the story of the female leaders who — in the face of towering economic, racial, and political opposition — fought for and won American women's right to vote.

This book has been endorsed by the likes of The Wall Street Journal, NPR and Hillary Rodham Clinton. The former First Lady and New York senator describes The Woman’s Hour as a “page-turning drama and an inspiration for everyone, young and old, male and female, in these perilous times. So much could have gone wrong, but these American women would not take no for an answer: their triumph is our legacy to guard and emulate.”

Divided We Stand by Marjorie Spruill

A book that can spark a binge-watch, Divided We Stand tells the fascinating true story of the characters in Hulu’s “Mrs. America.” It paints a broader portrait of the two women’s movements that spurred an enduring rift between liberals and conservatives.

The Smithsonian Magazine in 2017 ranked Divided We Stand as one of the “Ten Best History Books of the Year.” The New York Times Book Review connected the book’s narrative to the 2017 Women’s March, noting “Spruill … convincingly traces today's schisms to events surrounding the National Women's Conference, a four-day gathering in Houston in November 1977. These divergent narratives from 40 years ago offer many lessons to those hoping to maintain the momentum of the Jan. 21 women's marches.”

A book that recognizes the often unrecognized, 101 Women Who Shaped South Carolina puts a focus on the working-class women of diverse backgrounds who were actively engaged in the social, economic, and political battles of our state.

Published in late 2020, this book highlights the achievements of Columbia City of Women honorees such as Nikki Finney and Modjeska Monteith Simkins.

Caste: The Origins of Our Discontents by Isabel Wilkerson

I just finished Isabel Wilkerson’s Caste as part of my personal and professional exploration of the existence of historic and contemporary systems that continue to oppress, marginalize, and destroy Black Americans. In defining caste systems, Wilkerson equates the treatment of Black Americans with that of Indian “untouchables” and documents the Nazi caste systems as one modeled on Jim Crow laws. Wilkerson’s personal experience and historic accounts of race-based discrimination and violence, helped me understand the deep-rooted and insidious systems that we must face and work to dismantle if we are going to create a more just and equitable future.

I can’t underscore the importance of this work! - Robin Waites, Executive Director

Hair Love: A Celebration of Daddies and Daughters Everywhere by Matthew A. Cherry

It's a great book about a dad and daughter working together to figure out how to style the little girl's hair to go visit her mom in the hospital. It's got a wonderful message about a father’s relationship with his daughter, and helps to challenge expectations and stereotypes about relationships with daughters and fathers, especially Black daughters and fathers. It’s also an important example of representation for Black families, and a celebration of the beauty of natural Black hair. This book is important to me personally because not only is it a wonderful representation of diversity for readers of all ages, but as someone who grew up with curly hair and has a young daughter with curly hair, this book offers a great message of embracing and celebrating who you are, inside and out. - Kelly Kinard, Education Manager 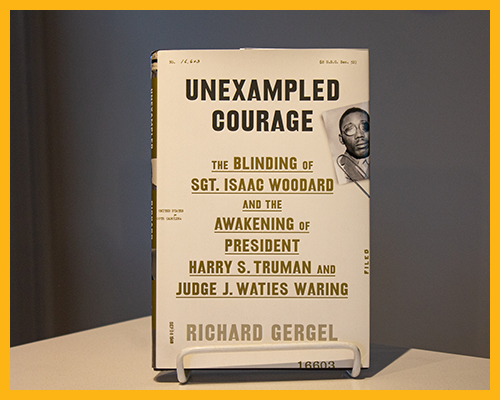 On February 12, 1946, Sergeant Isaac Woodard, a returning, decorated African American veteran, was removed from a Greyhound bus in Batesburg, South Carolina, after he challenged the bus driver’s disrespectful treatment of him. Woodard, in uniform, was arrested by the local police chief, Lynwood Shull, and beaten and blinded while in custody.

This book (Unexampled Courage) has been on my list ever since I saw Judge Gergel speak about it last year. He was so incredibly passionate about this overlooked, but key story of the civil rights movement that I'm positive his writing about it will be equally moving. - Betsy Kleinfelder, Visitor & Interpretive Services Coordinator

Stories of Struggle: The Clash over Civil Rights in South Carolina by Claudia Smith Brinson

A thorough dive into the subject, Stories of Struggle is the result of Claudia Smith Brinson’s two decades of reporting and interviewing Black activists. Smith Brinson has long been established as one of the leading female voices in South Carolina journalism. In newspapers for over 30 years, Brinson also taught writing at the University of South Carolina and directed the Writing for Print and Digital Media major at Columbia College. She’s won more than 30 state, regional, and national awards.

In April, Smith Brinson’s book will be featured as part of the Lourie Lectures.

The Lourie Lectures will also feature Historic Columbia’s own John Sherrer in April. The author of Remembering Columbia -- a series of photographs and descriptions of the city’s past – Sherrer will lead four online Zoom courses that explores the role that historic preservation has played in retaining tangible links to our past while providing unique venues suitable for contemporary demands.

Treading the Winepress; or, A Mountain of Misfortune by Clarissa Minnie Thompson Allen

Clarissa Minnie Thompson Allen, wrote “Treading the Winepress,” a fictionalized version of life in Columbia for Black citizens in the 1800s. While the work was published in serial form in The Boston Advocate, the work would have been the second novel written by a Black female in the U.S.

Thompson Allen was born enslaved on the Wallace Plantation (now Bull Street) and raised in Columbia. Her father, Samuel B. Thompson, was a legislator during the Reconstruction period. Thompson Allen taught at Allen University during the mid-1800s and later moved to Texas.