I was a newspaper photographer when I was a much younger man. During the late 1990s, as that field began to shrink, I went back to graduate school then on to work in the museum field.

I’m still a shutterbug though, and I still shoot good old fashioned negative film from time to time. Having a camera (which also happens to be a cell phone) in my pocket allows me to snap photos for work and for fun every day. That accessibility also allows me to occasionally take a photograph that’s more than a snapshot; one that jumps out as something that must be captured and shared. Taking this couple’s photograph was one of those unplanned moments. While the image speaks for itself largely, it also has an interesting back story that I’ve been asked to share.

Securing and locking up Historic Columbia’s four historic house museums takes about an hour every evening. Every room, every external door, and every shutter must be checked and secured in each house, then alarms activated and gates locked. It’s one of those less than exciting but extremely important tasks of day-to-day operations that folks don’t think about unless it’s your responsibility.

Recently while locking up the Robert Mills, I’ll admit I jumped when I came around a corner to see someone with their face and hands pressed against a window peeking in the basement. I think I startled him as well-me thinking someone was trying to get in and him thinking goodness knows what was moving around in an empty house. We both waved to each other and with an elevated pulse rate I continued to lock the house. Sometimes we still have visitors on site when the Museums staff person begins locking up process which is not a big deal, and we don’t rush anyone away. When I exited, I saw the man again, this time with a companion.

In striking up a conversation with visitors in such circumstances, I introduce myself ask if they missed the last tour. If they are from Columbia, I invite them back and tell them what time tours start the next day. If they are from out of town, I’m usually able to give them at least a quick walk through of a first floor so they don’t leave disappointed. This time I was happy to meet Reverend Ed Lochstampfor who pointed up to a room on the first floor and said, “I used to live there.”

I soon learned that Rev. Lochstampfor and his wife Charlotte met and fell in love while students of Columbia Bible College which used the Robert Mills property as part of their campus from the 1930s to 1960s. I invited the Lochstampfors inside for a quick tour, but they declined saying they didn’t want to hold me up, and they were just there to walk the grounds. We spoke for a few more minutes, not more than ten in total, but throughout I got a sense of the depth of their relationship. Charlotte told me that she married Ed because she knew she’d have an exciting life with him. Apparently, she chose wisely because after they 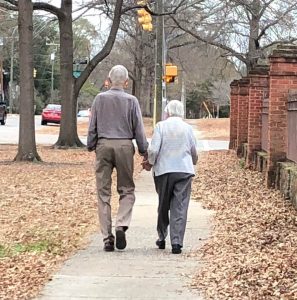 graduated in 1953, they married and were off to France for language school. The couple eventually served as missionaries for over 30 years in West Africa all the while raising a family. I’ve since learned they wrote a book about their experiences, “While There’s Still Time,” which is an account of their work in Burkina Faso and Guinea in West Africa.

We said our goodbyes, but we spoke of them returning for a longer conversation about their time here. As they walked out the gate ahead of me this moment appeared, and I scrambled to get my phone out to make the photograph. The realization is not lost on me that as well preserved as the house and grounds are, without seeing this couple literally walking down memory lane holding hands, I’d never have considered that a lifelong romance could have started at the Robert Mills. I’m thankful I was in the right place at the right time which is always the key to taking a meaningful photograph.