Once tethered to Columbia via unpaved roads and an electric streetcar line, the former home of Walter E. and Sophie B. McNulty today offers other connections—both to Shandon’s earliest years of development and to the desirable suburb’s tapestry of architecturally significant residences that contribute to the National Register of Historic Places district. When constructed around 1906, the couple’s asymmetrical cottage sat on what not long before had been farmland. Like the McNulty’s residence, the few neighboring houses would have been brand new and the roads they lined unimproved by today’s standards. Their home reflected both the latest style in design and a tangible icon of financial success in the form of a two-room servants house at the rear of the property. Whether by automobile (the couple’s “eight-room, one-story dwelling with bath” featured a garage) or by streetcar, Walter McNulty would have had a relatively brief commute to his job as a manager with the E.W. Seibels & Son insurance company downtown. His daily trips would have afforded him ample opportunity to witness the capital city’s growth beyond its original limits. Later owners, including the Bailey family, rented a room within the cottage, as well as the former servant’s quarters to cope with the financial strains of the Great Depression. This practice continued through the decades with potential renters—specifically “quiet lad[ies]” during the 1960s staying in the house’s “nice furnished front corner room” and enjoying “kitchen privileges” for the sum of $10 a week.

Fast forward nearly five decades to 2015. Long-time Old Shandon residents Hoyt and Sarah Burnett saw a new future for what had become a tired building suffering from more than 40 years of rentals as a duplex. neighboring their Maple Street residence. That vision involved returning the residence to its original format as a single-family, owner-occupied home. While the Burnett’s physical journey involved little more than crossing the street from their own home, the intrepid couple’s renovation journey would prove far longer. They chose a phased approach, with some renovations being completed in 2016, following six months of work, and the second phase of renovations beginning in May 2018 and being completed in March 2019. 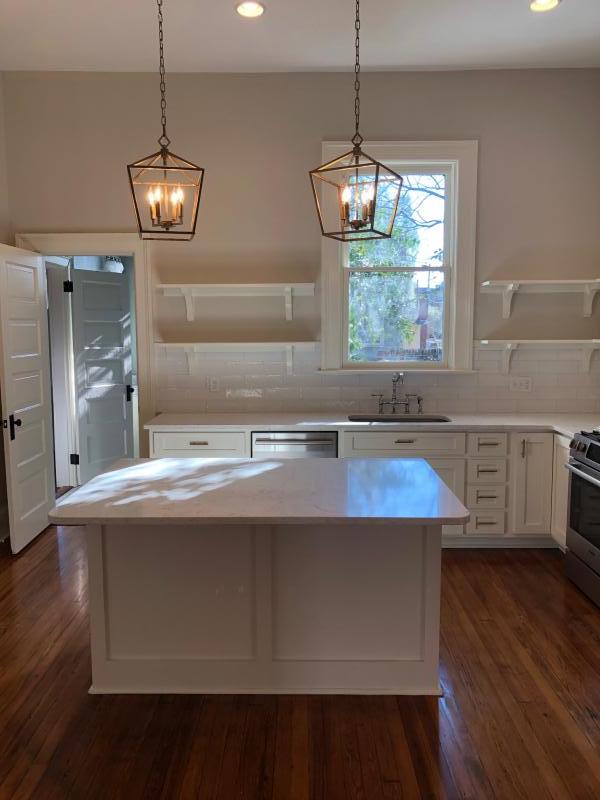 The new kitchen at 819 Maple Street. Image courtesy of Sarah and Hoyt Burnett

The process was not for the faint of heart. But the Burnetts were no strangers to rehabilitations, having had previous experience with two properties on Cypress Street and their early-20th century bungalow. Work involved removing all previous alterations made during the property’s late-1960s transformation into a duplex including both kitchens. With the back porch enclosed as a sunroom in a previous renovation, a center bedroom was more like a hall, so the residence’s new kitchen was relocated to this room. The Burnetts removed a wall to allow for an open floor plan from the new kitchen into the den, which had previously been the dining room. The circa-1906 original kitchen was converted into a master bedroom, with the original pantry maintained as a shoe closet. A laundry mudroom addition was enclosed and converted into a master closet Meanwhile, the butler's pantry and small bathroom was converted into a master bath. The guest bathroom was renovated, but a large swing window that could be opened as a type of vent was kept. All hardwood floors were stripped of five layers of paint and restored to their natural wood appearance. Further upgrades included the installation of central heat and air and careful restoration woodworking. As the tops of every bedroom door had been cut to simulate a transom, replacements custom-designed to match the existing doors that had not been damaged were installed. All doors received period sensitive hardware where necessary. Outside, the greatest work called for returning a secondary, duplex doorway to a window, as the façade had featured originally. This called for custom woodwork in order to meet the stringent guidelines for this City of Columbia Architectural Conservation District. Like families that had come before them, the Burnetts drew income from the former servant’s quarter, which received largely cosmetic upgrades while the worked on the cottage).

This project was a combination of effort on the part of the Burnetts, who handled all demolition and finish work, and Indigo Builders, which performed all major structural and carpentry work. The result, with its eye for detail and respect for character-defining elements, was a property worthy of the neighborhood’s National Register of Historic Places designation and yet another example of the couple’s commitment to historic preservation.